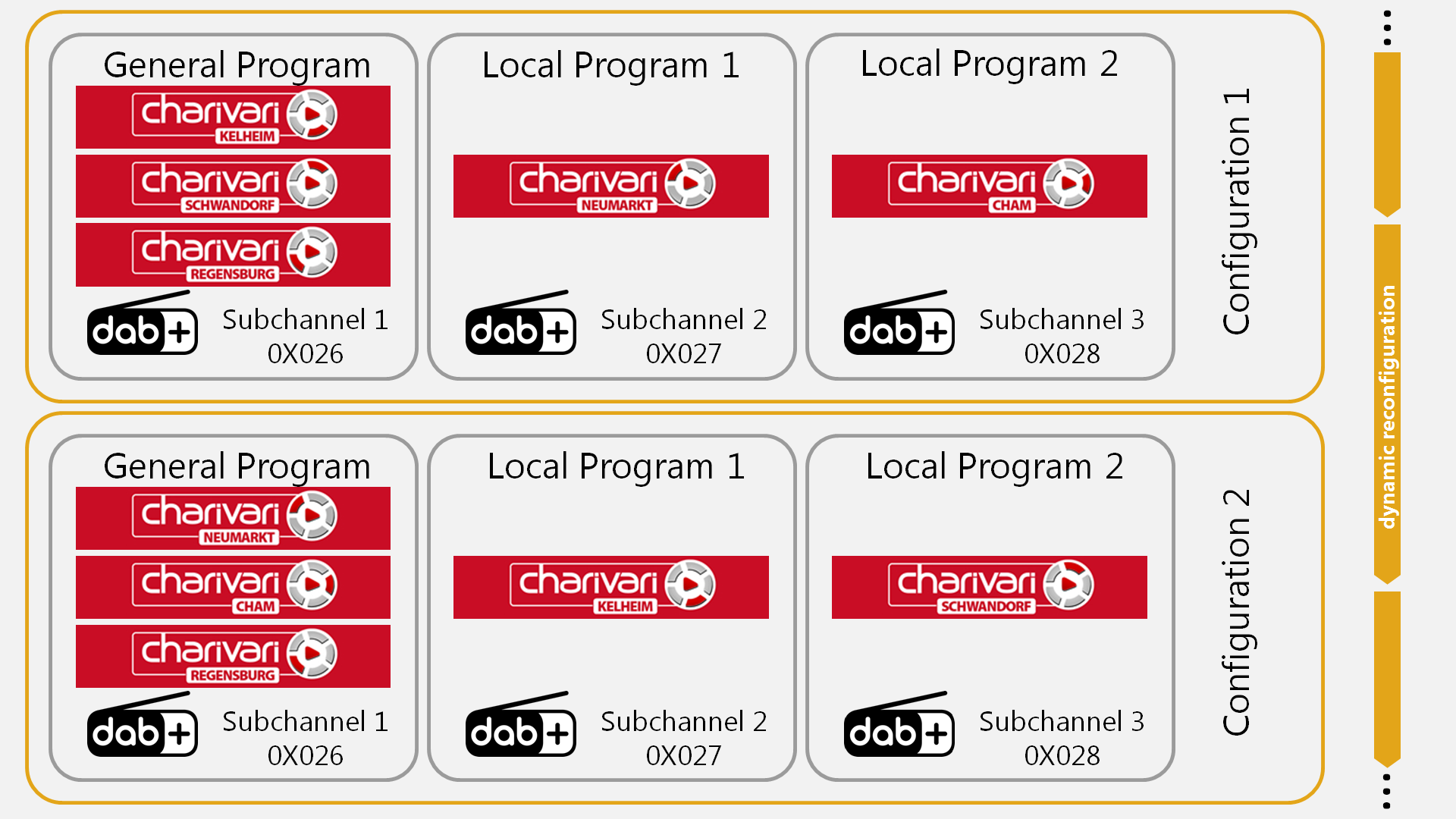 The IZT DAB ContentServer is the central component of the pilot project “Dynamic Reconfiguration” in the Bavarian region Upper Palatinate. In cooperation with Funkhaus Regensburg and Bayern Digital Radio, IZT provided equipment and expertise to optimize capacities and to enable regionalization of radio programs. On January 24, five Charivari programs with local content went on air.

Charivari has since been broadcasting five local program variants for Regensburg, Cham, Kelheim, Neumarkt i.d. Oberpfalz and Schwandorf. “The challenge is that for the five local programs, only three channels are available in the DAB Multiplex,” says Arne Borsum, Product Manager at IZT GmbH. “We take advantage of the flexibility of DAB. The DAB signaling allows a dynamic allocation of station IDs to the available subchannel capacities,” says Borsum. The dynamization of programs allows program providers to broadcast regional content and thus to place specific advertising for certain regions and target groups.

Charivari uses three DAB subchannels with 72 kbit/s each. In half-hourly rotation, two regions will receive local content and the other three regions will receive a general program. “We automatically control the periodic change of program allocations from our studio and trigger the according reconfiguration at the Multiplexer synchronously,” says Harald Hoffend, Technical Director at Funkhaus Regensburg. “This way, we can ensure that listeners notice the the changes as little as possible. They simply set the desired local Charivari variant in the radio and listen to a continuous program with information for their region.”

The private programs in the DAB ensemble “Oberpfalz” are processed in a so-called service multiplexer of Bayern Digital Radio GmbH (BDR) and then transmitted to the ensemble multiplexer of Bayerischer Rundfunk (BR). “This gives us full autonomy over the private program capacities without affecting the public service programs in the same ensemble,” says Alexander Jahn, Head of Operations at BDR. “Regionalization is important especially for the advertising industry, which is why this project is a pioneering step.”

Harald Hoffend is pleased that, “the cooperation with IZT and BDR was very helpful, especially in the planning and test phase. Without according test transmissions and receiver tests at IZT, a completely flawless launch of the new Service Multiplexer wouldn’t have been possible.”

“IZT has been our long-term partner for the reliable ContentServer technology. Multiplexers from IZT are in use for all our digital radio services,” says Jahn. The IZT DAB ContentServer is used by many broadcasters and network operators, including the German-wide DAB multiplex on channel 5C and the national, regionalized DAB network of NRK in Norway.