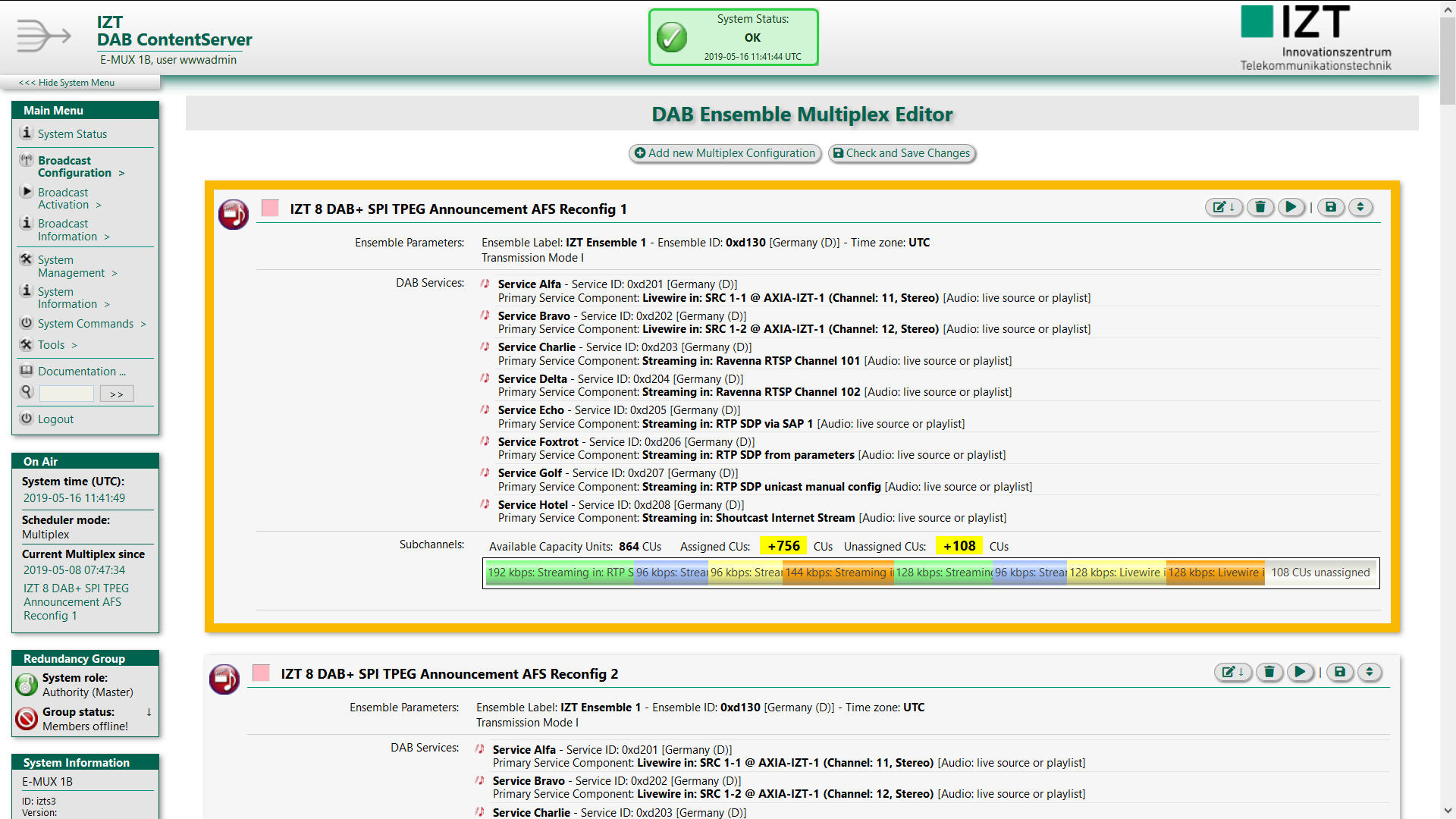 The IZT DAB ContentServer is a powerful system for DAB head-ends, including audio encoding, multiplexing and data service management.

At this year’s International Broadcasting Convention (IBC 2019) in Amsterdam from September 13 to 17 (hall 8, booth A.68), IZT GmbH is presenting solutions for digital radio systems as well as high-performance test and measurement products. Show highlights are new features for IT-based digital radio head-ends, a RF signal source with enhanced support for broadcast standards and equipment for virtual field tests.

The German technology company based in Erlangen offers, among other products, solutions for broadcast infrastructures like the IZT DAB/DRM ContentServer in addition to the IZT DAB Archive, a system for quality control and long-term archiving of DAB multiplexes.

With the signal generator platform IZT S1000/IZT S1010, IZT is also exhibiting a flexible RF test source supporting modulation for various communication and broadcast standards. The signal generators are applicable as a signal source in a laboratory. This also includes the usage of the devices as part of the IZT Record and Playback System. IZT therefore offers various RF receivers and enables to record a real-time bandwidth of 120 MHz with its new top of the line IZT R5010. The ability of recording RF signals during test drives and reproducing them in the laboratory can significantly reduce time-to market and cost when developing radio receivers. The product portfolio is completed by the IZT T1000 Broadcast Modulator, a compact, price-efficient modulator platform for the broadcast standards DAB and DVB-T/DVB-T2 and up to date radio direction finding technology.

The IZT DAB/DRM ContentServer incorporates the functionalities of a complete DAB or DRM head-end, including audio encoding, data service handling and multiplexing. „The reliable and long-proven solution is the perfect choice for DAB platform operators and broadcasters“, says Arne Borsum, product manager for IZT ContentServers.

The software system is either provided as turn-key solution on standard IT or can easily be deployed as virtual machine under VMware in IT data centers.

Further, IZT will demonstrate the IZT DAB Archive, a comprehensive solution for quality control and long-term archiving of DAB multiplexes. The system includes functionality to record and analyze the EDI/ETI signal being delivered to the DAB transmitter network.

With the IZT’s RF Receiver IZT R3000/IZT R4000, the IZT S1000/IZT S1010 signal generator can be used as a Record and Playback System. This enables the developers to perform virtual field tests, for example to build a data base of RF recordings and to reproduce field conditions in the laboratory. At the one side this ensures reproducible testing conditions. At the other side, development time and costs can significantly be optimized as the number of actually required test drives is reduced.

Download the
press release about IZT at IBC
or get more detailed information in our
technical article about receiver testing with IZT equipment.